But Signs Emerge of a Leveling Off This Year 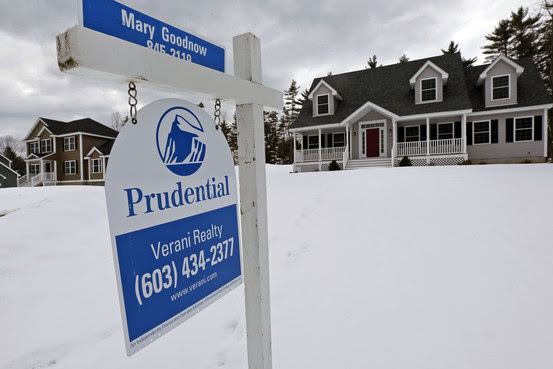 Home prices last year posted their largest annual gain since 2005, according to a report released Tuesday, but signs are emerging that price gains are leveling off.

U.S. prices rose 11.3% in the fourth quarter compared with a year earlier, according to the Standard & Poor's/Case-Shiller price index. The Case-Shiller index that measures home prices in 20 major metro areas rose 13.4% during the same span. A separate index, released Tuesday by the Federal Housing Finance Agency, said prices had gone up 7.7%, also to an eight-year high.

Rising home prices are proving to be a double-edged sword because, together with higher mortgage rates, they are reducing affordability, which has curbed sales. "Home prices will probably go up this year, but not like they've been," said Robert Shiller, the Yale University economist who co-founded the index that bears his name. "It's going to slow down." Mr. Shiller said last year's spike in mortgage rates, which jumped from around 3.5% in early May to 4.5% by June, had taken a toll on housing activity. While interest rates are "still low," the sudden increase "has offset the wild enthusiasm to buy a house that a lot of people felt in 2012," Mr. Shiller said. "We're seeing the impetus for the recent increase pulled out with the rise in mortgage rates." 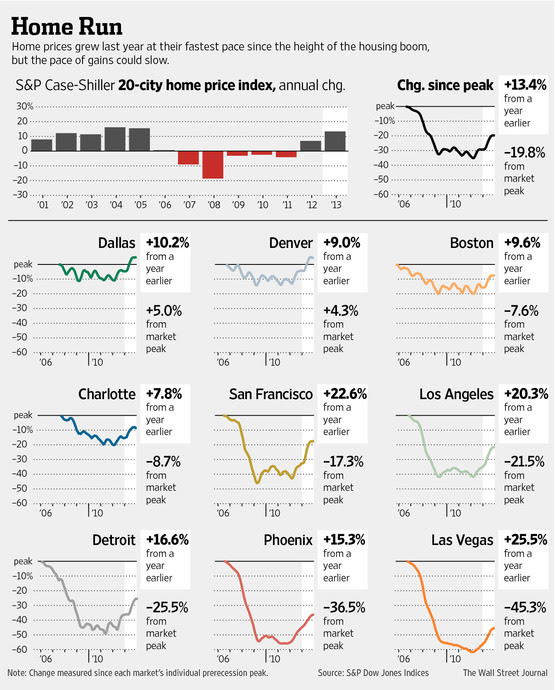 Prices rebounded strongly during the past two years as low prices and rates attracted brisk demand, first from investors and later from traditional buyers who competed over a shrinking supply. Higher prices have led investors to slow their purchases in more markets, while rising rates have dented affordability for owners who need a mortgage, especially first-time buyers.
"There's no question that [the entry-level] market is not participating in the recovery as it normally has," said Ivy Zelman, chief executive of Zelman & Associates, a research firm.

Prices decreased 0.1% in December from November in the 20-city index, the second straight monthly decline. Sales tend to slow in the winter, which can lead to softer prices, but the monthly declines during the fourth quarter were still the smallest for that period in eight years.

Other recent measures of housing sales have pointed to weaker activity, which could drag on economic growth if they don't rebound during the spring selling season. Sales of previously owned homes fell by 5.1% in January from a year earlier, the National Association of Realtors reported last week. The Commerce Department is set to report Wednesday on new-home sales for January.

Real-estate executives say as housing costs rise, buyers are becoming more selective. "A house with a $1,600 mortgage payment last year now has a $2,000 mortgage payment. Buyers are saying, 'I better like it,' " said Glenn Kelman, chief executive at Redfin, a national brokerage.
Home builders during the past year have boosted profits by building more-expensive homes. Luxury builder Toll Brothers Inc. on Tuesday reported a 21% increase in its average sale price during the quarter that ended in January versus the previous-year period. But those price gains appear to be curbing sales volumes. Toll said new contracts for homes in the quarter fell 6% from a year earlier and it cut its forecast for total closings for its 2014 fiscal year by 4%.

"The market's not bad—don't misunderstand what I'm saying," Mr. Sorsby said. "We're just disappointed that we're not back to last year's levels."

Tuesday's home-price report, along with other data from Zillow Inc., points to a deceleration in home prices in many of the markets that have posted the largest rebounds during the past two years. Home prices in Phoenix fell by 0.3% in December, breaking a streak of 27 consecutive monthly gains.

All 20 cities reported annual gains last year, with the largest in Las Vegas (25.5%), San Francisco (22.6%) and Los Angeles (20.3%). Those have seen the pace of increases slow since last fall.
Any moderation in home prices could ease concerns that prices were rising unsustainably fast relative to incomes. On the whole, U.S. home prices have risen 21% after hitting bottom in early 2012, according to Tuesday's Case-Shiller report. Prices, which fell 35% between 2006 and 2012, are now 21% below their previous peak and back at levels seen in mid-2004.

Home Depot Inc. HD +0.45% said Tuesday that it expects home prices to rise this year at half of last year's rate. The world's largest home-improvement retailer said "a strong recovery in housing prices" drove a fourth-quarter sales increase of 4.4%, excluding newly opened or closed stores.
"While some of the housing data has softened, we continue to believe we're in a moderate stage of recovery," Carol Tomé, Home Depot's chief financial officer, said during an investor call Tuesday.

Posted by Rich Bowden at 8:53 AM No comments:

So You’re On LinkedIn — Now Use It

You don’t have to be a super-user of this social-networking site to get leads from it. Here’s how to use it lightly and still make it work for you.

Jon Sterling scored a new client in a peculiar way. He didn’t capture a lead through paid online advertising or through social marketing. He simply made a new connection with someone on LinkedIn who happened to have gone to the same school he did — and before Sterling knew it, the person became his client.
Sterling, an agent with Chase International in Tahoe City, Calif., had been looking on LinkedIn for San Francisco residents who work at technology firms. When he came across his soon-to-be client’s profile, he sent a personalized invitation to connect. And as they began talking, Sterling came to realize that his new connection was also shopping for real estate in Northern California.

“One of my posts about the Lake Tahoe market got his attention. He reached out and told me he’ll be ready to purchase in a few months,” Sterling says.

That should show other real estate professionals that they would be wise to scout LinkedIn for business. Even if you’re not a social-networking genius, LinkedIn can be a powerful tool to make connections and drum up new clients.

“LinkedIn is a platform for practitioners to establish credibility through their professional identity and demonstrate their deep subject-matter expertise,” says Alan Wang, an agent with Keller Williams in Cupertino, Calif., who also heads up LinkedIn’s new market development and operations for the Asia-Pacific region.

It starts with creating a compelling profile. The key is to set it up as an online resume with a professional photograph. Put awards and alma maters high up in the profile, Wang says. Making your headline a catchy tagline or call to action, like you often see on business cards, is powerful.

Take, for example, Nick Ratliff’s tagline. Ratliff, the principal broker at Cypress Residential Group in Lexington, Ky., states on his LinkedIn page: “Using Technology to Change My Market.” His summary begins with the small town where he was raised (Mount Sterling, Ky.), then segues into alma maters, professional degrees, and his favorite sports teams. He ends his five-paragraph summary with a bit about why he decided to get into real estate, as well as his specialties.

“I’ve found over the years that I’ve had a number of potential clients call and simply say they called because of my bios,” Ratliff says. “Some have been engineers or similar trades who feel comfortable working with me, while others are just big University of Kentucky fans and enjoy talking with me about that.”

Though some professionals downplay the relevance of endorsements since they’re easy to do (connections can check off skills they think you have in a pop-up window when looking at a colleague’s profile), Wang thinks otherwise.

“It’s a good sign when I see 200-plus endorsements; it’s a validation of who you are, what you are doing,” he says. Endorsements also encourage prospective clients to read your profile, look at your status updates, and more, Wang adds.

Many practitioners use LinkedIn to check out prospective clients, and they encourage their clients to do the same. Ratliff uses it to stay up to date with connections. “For instance, if someone I know gets a new job and changes it on LinkedIn, then I can reach out to them to congratulate them on their new job,” he says. “That allows for a soft sale by finding out what their plans are and reminding them we are here if they need our services.”

Slideshare, a platform that allows for sharing content, business documents, and presentations, is one little-known new feature on LinkedIn that’s gaining popularity. Wang uses the platform for a “building a business on referrals” presentation to theSilicon Valley Association of REALTORS®. But Washington, D.C.-area agent Leslie Woods-Hulse uses it for listings. Slideshare allows her network to see the listing information and photos all at once without having to navigate away from LinkedIn. Other social media sites, such as Facebook, don’t offer the same capabilities to show contacts as much information about listings.

Even a passive presence on LinkedIn can be lucrative. Relationships matter, so Wang does what he calls “no-strings-attached networking,” engaging his connections through status updates, sharing important articles, or simply being involved in conversations or activity around another member’s profile (such as promotions, job changes, and questions). That networking has paid off with 15 to 17 LinkedIn connections who bought homes using his services in the past year. Wang boosts business with a quarterly blog post focusing on the economy and local housing market, which he e-mails to his network. Email recipients tend to take a peek at his LinkedIn profile later, he says.

Members of the National Association of REALTORS® can also join NAR’s official LinkedIn group or other related groups for free.

“The forums are good places to identify service providers, potential clients,” says Bruce Ailion, an agent with RE/MAX of Georgia in the Atlanta area. “I’m currently looking for remodeling and new-home contractors. Most are happily employed, but they may know someone looking for work, and this is a good way to find people.”

Ailion has also targeted likely investors for a property expo in Tel Aviv with a small paid ad on LinkedIn. He set up and launched the ad following prompts in LinkedIn’s Business Services section. Fifty investors responded to the ad, and one expo attendee purchased three $200,000 properties.“Advertising and networking on LinkedIn works,” Ailion says.

As you probably know, the number one reason consumers visit real estate websites is to look at properties. Don’t drive people to other websites to view properties in your MLS. If your website doesn’t have IDX integration, you’re probably losing potential clients to your competition. Our IDX integration features consumer-friendly searching, large property photos, virtual tour integration, neighborhood and school information and more.